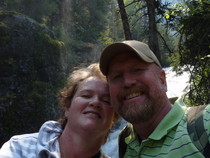 Bio: Pastor Del grew up right here in the beautiful Bitterroot Valley.  His home was just three  miles from the Charlos Heights Community Church.  When he was a junior in high school he began to date a young lady named Colleen Anderson, who's father, Cliff Anderson, was the pastor of the Charlos Heights Community Church.  He started coming to youth group at the church for an opportunity to spend more time with his new girlfriend.  Colleen's mother, Mona Anderson, was leading the youth group at the time, and from time to time shared the gospel.  Del went home one night after hearing the gospel and couldn't sleep.  God was stirring his heart, and soon, he trusted Jesus Christ as his Lord and Savior.

He and Colleen attended Montana Institute of the Bible and were married after their first year of Bible college in June, 1973.  He and Colleen began to serve with Village Missions in 1977.  After two and a half years he took a one year leave of absence.  That year stretched into 17 years.

In December of 1996, while attending the Charlos Heights Community Church, Del was working for a helicopter logging operation when he began to think seriously of getting back into ministry.  One night, while working away from home in Avery, Idaho, he went into town to call home.  Colleen told him that she thought he needed to get back into the ministry.  He went back to his camper trailer that night and prayed, "Lord, whatever it takes to get me back where you want me to be, I'm willing."  He immediately had a strong impression, one might even say a "vision" of losing his eye in a logging accident.  He thought about it for a minute before saying, "Lord, that wouldn't be my first choice, but if that's what it takes, I'd be willing to do it."

The next morning as he was leaving his pick-up truck to hike up the mountain to where he was working, the same impression came flashing back into his mind.  He went back to his truck to get a pair of glasses that he only wore while driving at night.  While limbing the first tree that he cut that morning the tip of his chainsaw shattered and a piece of steel from the sprocket tip came flying back and shattered the right lense of his glasses.  A piece of glass slashed through the cornea and into the lense of the right eye, instantly blinding him.  God filled him with peace and an assurance that He would use this injury to open doors of service.  Within 9 months he and Colleen were back serving the Lord with Village Missions in Philipsburg Montana, where they worked for almost 15 years.

In January of 2012 the leadership of Village Missions asked him and Colleen if they would be willing to return to their home church, Charlos Heights Community Church.  They loved Philipsburg and the people of the Philipsburg Community Church, but felt that God was definitely leading.  They came back to Charlos Heights in March of 2012.  Del and Colleen have 4 grown children and 11 grandchildren.

Bio: Andy was born in San Mateo, CA and grew up in that area, graduating from Woodside High School in 1974.  In 1970 he encountered a person who changed his life forever.  That person is the Lord Jesus Christ.

Andy married a young lady that he met in Bible college while they were still going to school.  Later they separated and were divorced.  In 1985 he met and married Claudia Davis, and they have been serving the Lord together since that time.

His work history includes carpentry, teaching, coaching football, construction (he had his own construction company, as well as working for other construction companies), and he has been a law enforcement officer.  One of his passions is Nascar, and he drove a 1986 Winston Cup Ford Thunderbird Nascar car at various road courses in California.  He also drove on the Charlotte Motor Speedway for Richard Petty Driver Experience.

His main passion is teaching the Bible and serving the Lord.  In his adult Sunday school classes he utilizes his wealth of education and experience  to bring the Bible to life.  He has been on a number of mission trips to El Salvador; Chihuahua, Mexico; the Dominican Republic and Jamaica.

His life was radically redirected in the summer of 2010 when he became severely ill with a rare disorder.  The disease progressed rapidly, and he was bedridden for six weeks.  In February of the next year he began an experimental infusion therapy.  It worked.  After a total of 12 infusions, at the beginning of which he was wheelchair bound, he was able to walk on crutches.  Since November of 2012, he has been able to walk without crutches--Praise God!  Throughout this time God has used him to disciple men and teach various Bible classes.

He and his wife Claudia live on their ranch Southeast of Hamilton, Montana.  They have two grown sons.

God has created us to be worshipers.  We believe in a glorious God who is worthy of all our praise and adoration.  We see our primary function as a church to be worship.  Our goal, every time we meet, is to encounter the living God through worship (which, by the way, is not just singing), praise, prayer and the ministry of the Word of God.

People need the Lord.  He sent his Son to die on the cross for us because there was no other way.  If it was at all possible for us to get right with God by keeping rules and doing good works, do you think that God would have sent his Son to die?  Paul wrote in Galatians 2:21, "I do not nullify the grace of God, for if righteousness comes through the works of the Law, then Christ died needlessly."*  In Ephesians 2:8-9 we read, "For by grace you have been saved through faith; and that not of yourselves, it is the gift of God; not as a result of works, so that no one may boast."*  We are not save by works, but by faith in the Lord Jesus Christ, who said, "I am the way, the truth and the life.  No one comes to the Father except through Me" (John 14:6*)  So we see our secondary reason for being here to be sharing the gospel of our Lord Jesus Christ.

A third reason that we're here is to build one another up in the faith.  Our ministry is to the Lord, then to one another, then to the world.  We believe that we'll never get our outreach (evangelism and service) right until we get our upreach (worship) right.

Our office is located in the east end of the parsonage on the northwest side of the parking lot.  Pastor Del is usually in the study between 7 a.m. and noon Tuesday through Friday and all day Saturday.  Please stop by.  We'd love to see you.